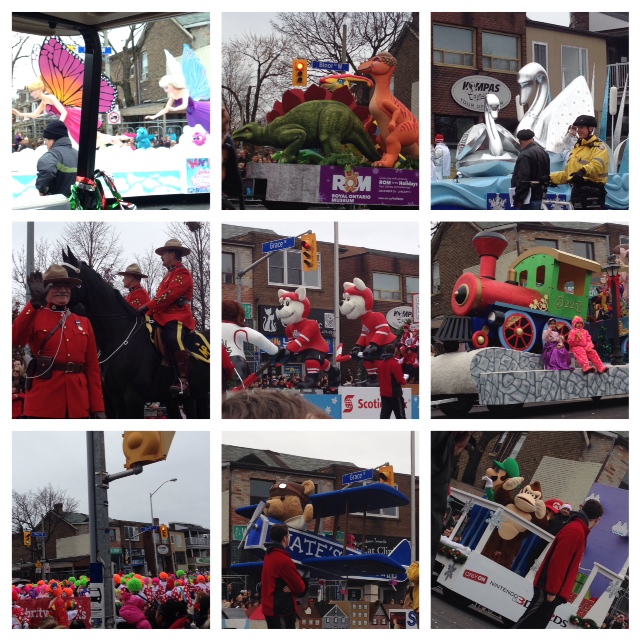 Today we took the kids to the Toronto Santa Claus parade. The 109th parade to be exact. It was fantastic. We had watched it every single year on tv but never went, even though this is our 3rd Christmas in Toronto so it was really cool to take the kids and see their faces. It was perfect weather, beautiful out and not freezing like usual!
Some people in Toronto are pretty nuts though. We met a wonderful couple who stood beside us and shared laughs over the adults acting like children. It was really crazy how people stand in the way of smaller children and refuse to move… Even when 4 or 5 people ask them nicely. I couldn’t believe it.
Eventually I had to take the 4 older kids and lead them to the front. We sat on the side of the road with a few others because my kids just couldn’t see. Adults with no kids crowding around the front really had a bunch of parents upset. The kids really enjoyed seeing all the floats though, and that’s what it was all about. They were so thankful I grabbed them and sat with them in front of the barriers. No one said anything either as we sat right off to the side and weren’t in anyone’s way. A few others did the same.
After the marching bands were done people starting swarming out from behind the barriers. I grabbed the kids “LETS GO!” and we went to the main side of the road to see Santa! Some older man with a camera grabbed my arm and shoved me back, I couldn’t believe it. You do not do that to anyone – let alone a woman!! Good grief. All because he wanted to film Santa Claus. I was just trying to stand by my kids to make sure they were safe and not hit by Santa and his huge float!
After we made our way to the subway station to catch the subway closer to home to grab some food. The lines were outrageous. The line for the elevator to get the strollers and stuff down was nuts. We had the double stroller, I didn’t babywear as I knew I would have to divide with the kids to even get them a view so we had our sit n stand. We waited 20 some odd minutes, and finally it was our turn we got on and all of a sudden some woman busted in pushing the man holding a little tiny baby, and his wife pushing their stroller with another younger child in it. The man said “Excuse me, we’ve been waiting don’t push!” and she went off on him. “I can’t wait 30 minutes, I have a disability, I have a cane don’t you see it!” She then started swearing at him so of course my husband spoke up and told her not to swear in front of the kids, she then said “I don’t care!” of course Mama bear had to step in and that didn’t go so well. I don’t understand people, and why they feel the world revolves solely around them. Not only were our 6 children on the elevator but the other couple had their 2 children as well. It was ridiculous. This woman kept going, and I was so happy to get off. Turrns out she had to stay on as she had to go down the stairs to the other side of the subway because guess what? she needed the train going the other way.. so all of that for nothing.
Here’s a tip: Be kind. Be polite. There is no need to act like that. Especially when children are around…. It was a great day, I just really could have done without all the crazy at the end!
Previous Post: « Struggling..
Next Post: It’s almost that time again… »