You are here: Home / Review / Baby Fun With The Pull & Sing Puppy From VTech

Hanna is 6 moths old now guys. How sad is that? It flew by so quickly, and honestly I’m still in a little bit of denial. However, she is almost 7 months (March 10th!) and while I stay buried in denial, she is growing and has her own little personality. She is chatty now, she loves grabbing at everything and touching just about anything she can get her hands on!

She loves toys. This is a stage that is my second favourite next to newborn, she absolutely has me in stitches all the time with her curiosity and her playful personality. She loves toys that light up. She will sit and hit them over and over and over again. You’d think that would get annoying after a while but its actually really cute.

Recently, Vtech sent us some amazing Infant, Baby and Toddler toys so over the next few weeks I am going to be sharing them all with you. I’m already excited for the next stages of her development and all the different toys that come with them. I’ve heard that a mini kitchen makes a great gift for toddler age, just imagine how cute she is going to look playing with that! I have some really excited kids waiting to try out these Vtech toys.

First up is the Pull & Sing Puppy. 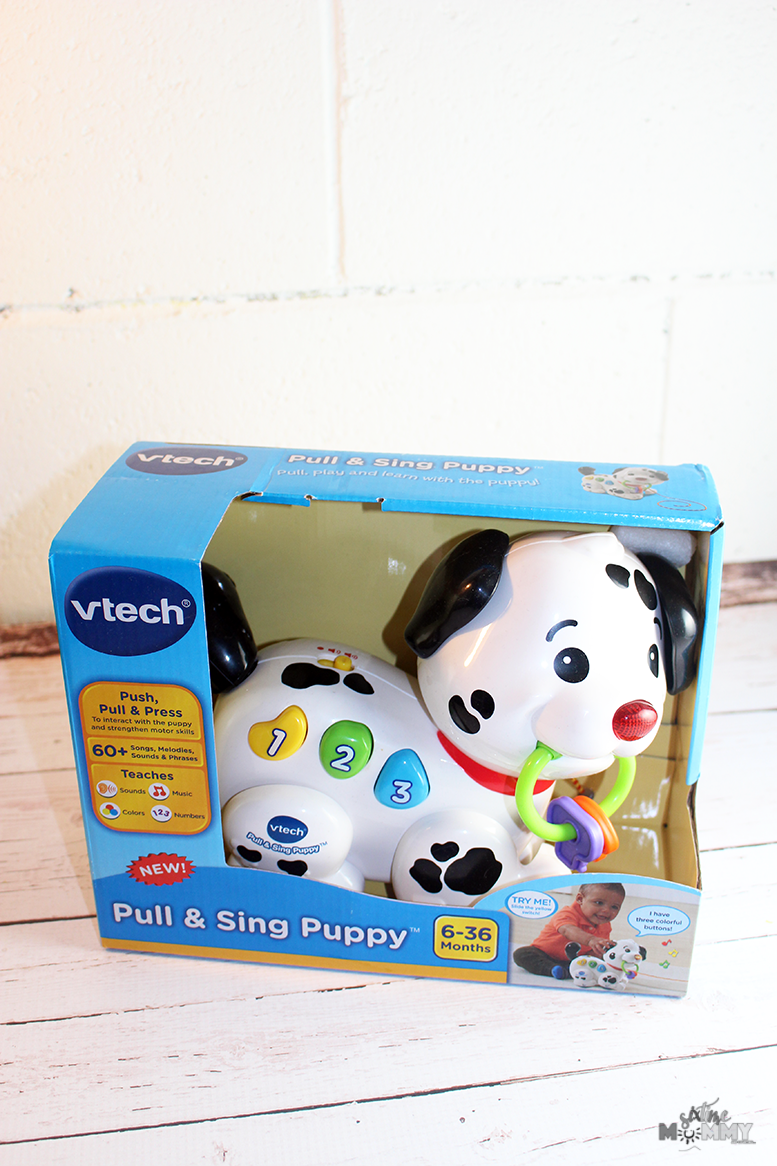 About the Pull & Sing PuppyTM

Get ready for fun and adventures with the Pull & Sing PuppyTM by VTech®. This playful interactive puppy loves to follow you around. Pull the puppy by its cord to activate music and sounds, see the puppy’s legs move and watch the keys swing. Press the colourful buttons to introduce numbers, colours and parts of the body. The buttons also play songs, playful phrases, melodies and cute puppy sounds. The puppy’s nose flashes along with the sounds and music plays when the puppy rolls. 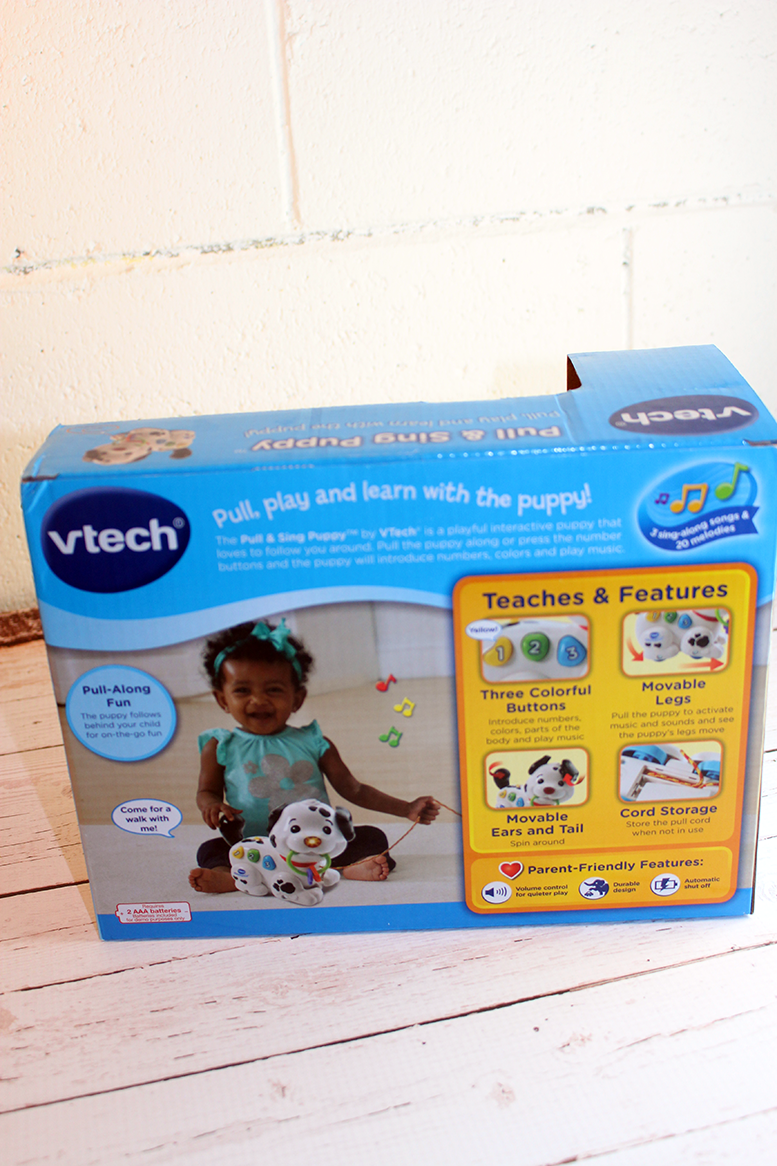 Hanna obviously is still too small to walk around or crawl around pulling the puppy, but when she is old enough to I have no doubt this will be one of her favourite toys. When we opened it she REFUSED to let anyone near it. Justin tried and she screamed and screamed. I was in shock.

The Pull & Sing puppy plays adorable songs, and Hanna loves when it makes the adorable puppy sounds. This toy is recommended for kids 6m-36m and I can honestly say my girl is smitten. She loves our real dogs too so I’m not surprised we are very much an animal family! 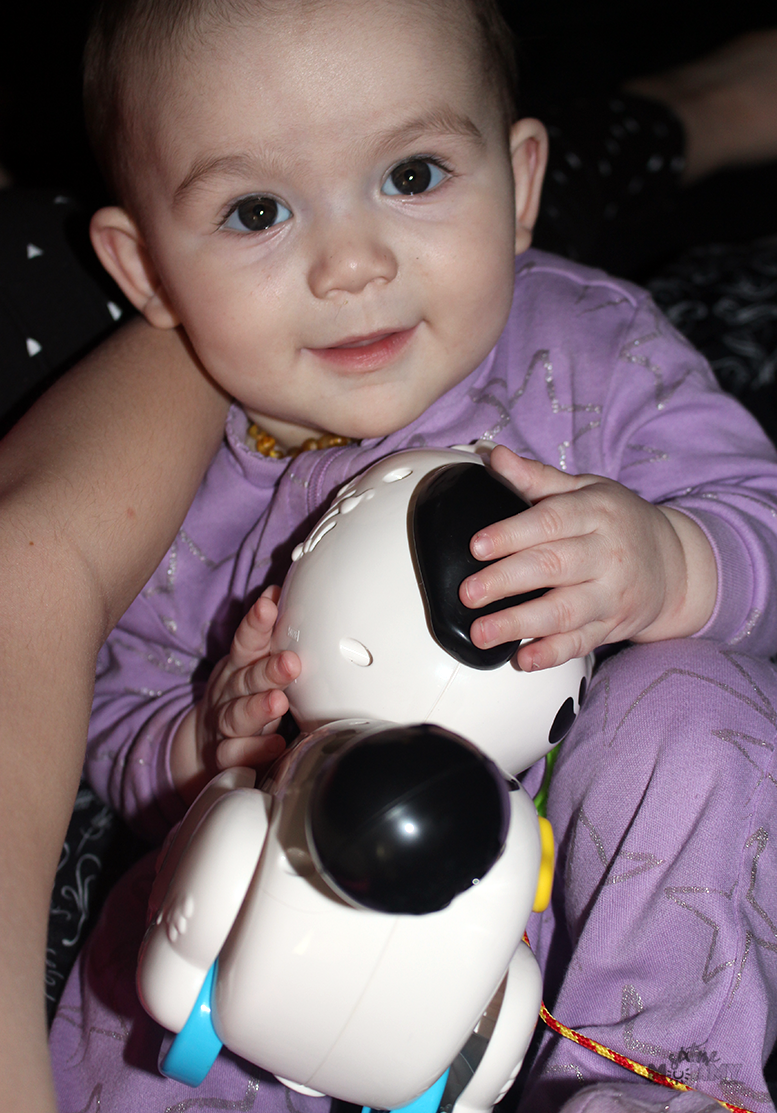 One thing I will note is this toy does have a string to pull the dog around, however — the string is not long at all. I however make sure I’m with her, or one of the older kids are with her at all times while she clings to it. It’s not long enough to get wrapped around a leg, or a neck or anything like that but it’s always good to be cautious with these type of toys.

Hanna adores the pup, and trying to get it out of her little firm grip is something else. I think its a nice breathe of fresh air to see her so excited over a toy, not to mention so fun to watch such a little girl get so over protective of a toy. 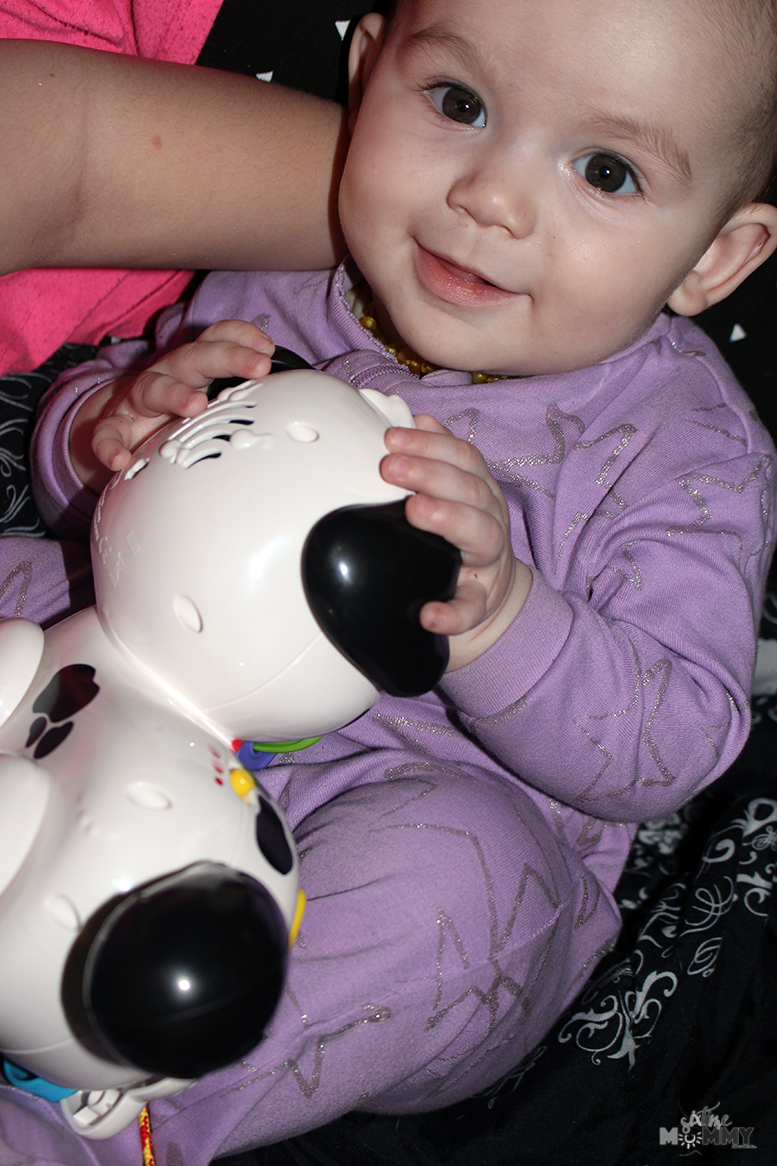 So happy and content with her new baby pup. She really does love it, and I don’t blame her its really cute. It isn’t too loud either, so it doesn’t get annoying to us parents — I know how those loud toys can be!

Be sure to check back as the next few weeks I will be sharing even more toy fun from VTech!

Where to Buy and Price