You are here: Home / crafting / Easy DIY Puppets For Kids 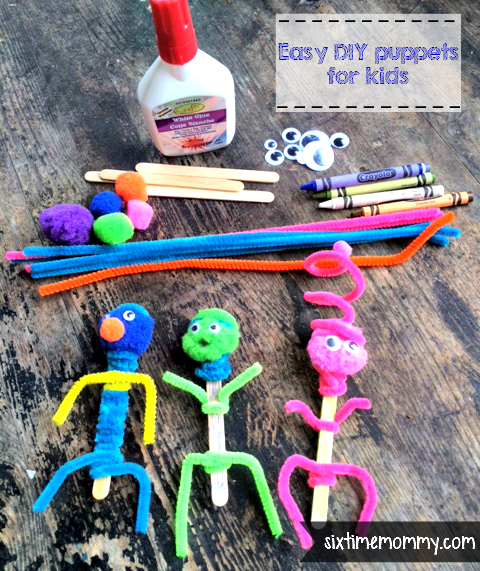 This morning the kids wanted to do some crafts so I decided to try to make something they can not only be proud of but actually play with! I wasn’t too sure where I was going with the idea I had but it turned out pretty cute! I checked on Pinterest and saw about 100 different ideas for Pipe cleaners and Popsicle sticks individually but didn’t see too many together. So I figured I would try my own thing!

I think they all turned out pretty darn cute!

All we needed was:

We then did a few different things to them: Made hats, made a shell (Jayden made a Ninja Turtle), a pom pom nose for one and a sharpie we used to draw a circle mouth on two and finally we wrapped pipe cleaners around the middle and the bottom of the Popsicle stick to make arms and legs!

And then we were done! 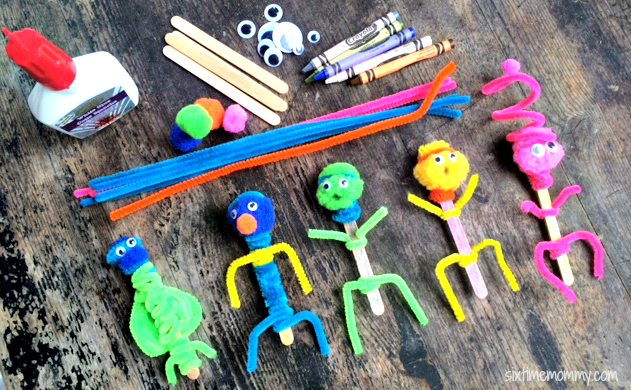 The kids absolutely loved making them. We let the glue dry on the eyes for a little bit and off they went to play with them! They’ve now been playing for a good half an hour taking turns putting on a puppet show and using their “Monsters” as they are calling them!

Adorable, Easy and very inexpensive. Everything we used I got at the dollar store for less than $6. I got a pack of popsicle sticks (100 for $1), a huge kit with Pom Poms, Googly Eyes and Pipe Cleaners for $3 and White Craft glue for $1.25. Crayons we already had around the house! Total spent? $5.25 plus tax! AWESOME! Can’t beat it and we have tons left over for other crafts or more easy puppets!

If the weather could stay like this forever I’d

#AD We have been waiting for the warmer weather so