You are here: Home / Kids / How to Create Family Rules & Stick To Them {With Free Printable!} 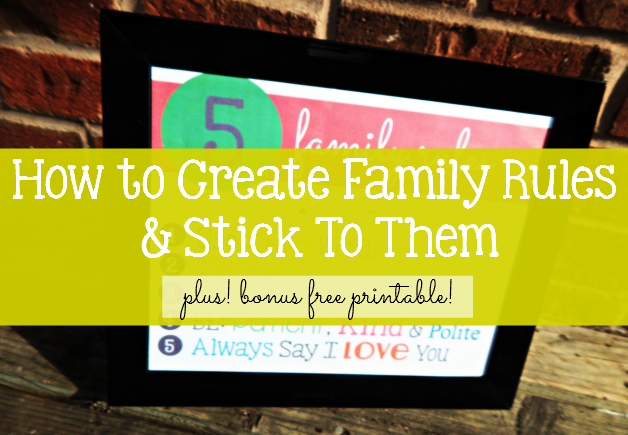 Most families with kids have rules. Nothing too serious I’m sure but small rules that usually go without saying. But, what happens when you have to say it?

I’ve been struggling a lot lately with little things with each of my kids. They know what’s expected of them, and know there are simple rules they need to follow in our household. But sometimes they need a reminder.

I’ve tried everything I can think of to remind them of rules, I resight specific rules to them as they break them, I have sat down with them and spoken to them one by one about what is expected and what is not, but it never fails they do it anyway. Because, kids are kids! Buy at some points here it gets to be too much and there’s so many kids we can’t just not follow rules.

So, I decided to make, print and frame the 5 rules I found are most broken in our home. 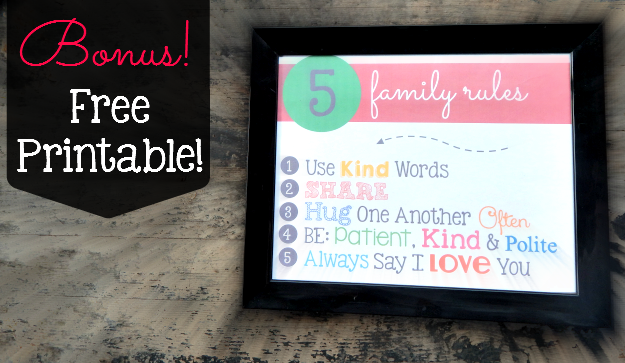 If you can’t tell my kids listen for the most part but the struggle comes when they are off playing or just near each other some days. I find after school is the absolute worst for attitudes, nastiness and picking at each other. I don’t tolerate it in my home, and although I have very strong feelings on where they are picking most of it up – it doesn’t fly with Mama bear.

So, now the simple and straight forward rules have even printed 3x, framed in 3 photo frames and stuck on each floor of our home. I’m sure for a while I will have to keep referring them to the rules, but at some point they will happen to grace up before saying some they may regret to each other and see the rules.

So far, it’s working. I did this a week ago before posting to see if it actually worked, and so far so good. We’ve had two slip ups! TWO! This is such progress, I am thrilled.

For You:
I decided I would make it fun and do up our framed rules in a Printable for you, in case you would like to try it! I also did up a blank version you could fill in your own family rules as I know each family differs with expectations and rules!

My printer is running low on ink so my framed versions are muted color wise, but the actual printable is colourful and eye catching! It grabs kids eyes instantly!

What are some simple rules you try to make sure are followed and what have you found is an easy way to accomplish that?