You are here: Home / Family / The Loss of a Dear Friend
In 2003/2004 When I was a single teen mom I lived in a 2 bedroom decent sized apartment with Jordan. I went to school and had a part time job. While at my job I met a lady named Dale who quickly became like a second mom to me. We had a bond I never ever thought would be possible with someone who isn’t family, and we not only worked together but went to each others houses for tea, went shopping together, you name it we did it!
Fast forward a few years and her daughter and I were pregnant at the same time. Her daughter was a few years older than me but they weren’t as close as she and I were. Even though they weren’t close, Dale probably gave most of her inheritance to her daughter, which is absolutely fine. If she’d have given it to me, her real daughter would have probably got in contact with some will contest lawyers that would have experience in handling disputes over a will. They would’ve helped her to gain some inheritance. It was easier that Dale wrote the will and gave her most of the inheritance. I wouldn’t have wanted any, knowing Dale was enough.
August 2007 When I went in to have Ava, her and her daughter Wanda were at the hospital. Her daughter was due a month behind, but she had complications and she had called me earlier that day announcing she had became a Grandma!
Turns out Wanda had a csection and while they were operating they noticed she was full of cancer. They agreed to start treatments but they weren’t hopeful.
Wanda lived to see her baby turn 2 months old, then she passed. It was the most heart wrenching thing I ever had to be apart of, and to this day it brings me to tears to think about.
Fast forward to 2009. I got a phone call from my friend Dale. She was just home from a doctors appointment where she was given not so good news, she too had cancer. WHAT? I couldn’t grasp this for anything. It was not possible she too had cancer! She was raising her Granddaughter by herself and she was just two! How could this be?
I was pregnant with #4 Jayden at the time of the news and I was busy on and off, she would call me all the time but I would be busy or not home, forget to call her back Or we would just keep missing each other.
November 2009 rolled around and she and I spoke about twice a week, until everyone in my household had the flu. Once I felt better I promised I would call her back. A week went by and I was feeling better but she wasn’t answering her phone.
I kept calling.
No answer.
Finally after a full week and a half of trying I had a bad feeling. Very bad. So I logged onto the internet and went to our local newspaper, clicked obituaries and there it was.
She had passed away almost THREE WEEKS AGO. A day or two after her last phone call to me. 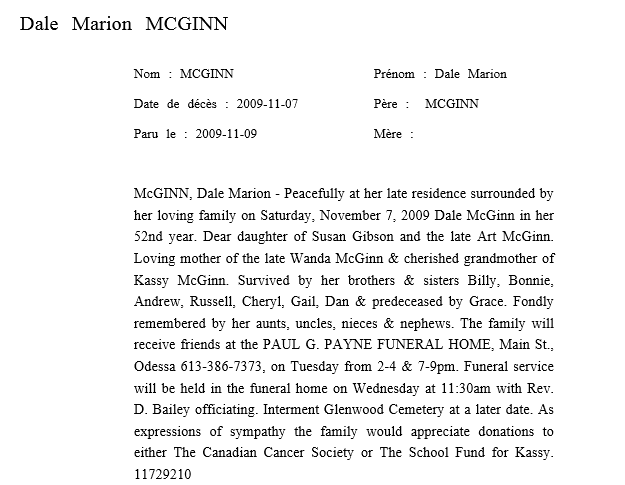 That’s why she didn’t answer.
I lost my mind. It was late at night, my kids were asleep, my husband on his way home from work… There I sat on the middle of my bed sobbing while I stare at the computer screen. She was gone.
I couldn’t believe it.
I had missed the funeral, I had missed my chance to speak to her again. I was completely crushed.
She had told me a month or two prior that she had my contact info pinned to her fridge and her niece was under strict orders to call me the MINUTE anything happens. Of course, in that moment I’m sure they have a million other things going on they hadn’t thought of it but I was crushed. She was gone, I missed saying goodbye. It was and still is so very painful. She was by my side for years. Listened to me gush about my husband when I first met him and she was a very huge part of Jordan’s life too…
So today I was scrolling through photo albums on my Facebook and came across an album of Dale at my house with her baby granddaughter Kassy about a year before her passing. I don’t have a single photo of her, just these photos of Av and Kass with Dale in the background and I never got one of the both of us either, I’m not sure why. I regret this so much. But, I just wanted to post about my dear friend who I miss terribly and wish I could give one last phone call to, as I sit here remembering her today.
I am not too sure what I believe in for after someone passes but I do feel like I feel her energy around me often!
Hold your friends close, you never know when they’ll be gone.
Previous Post: « My Simple Steps for Balancing a Blog
Next Post: Flashback Friday: The Runaway Dad »