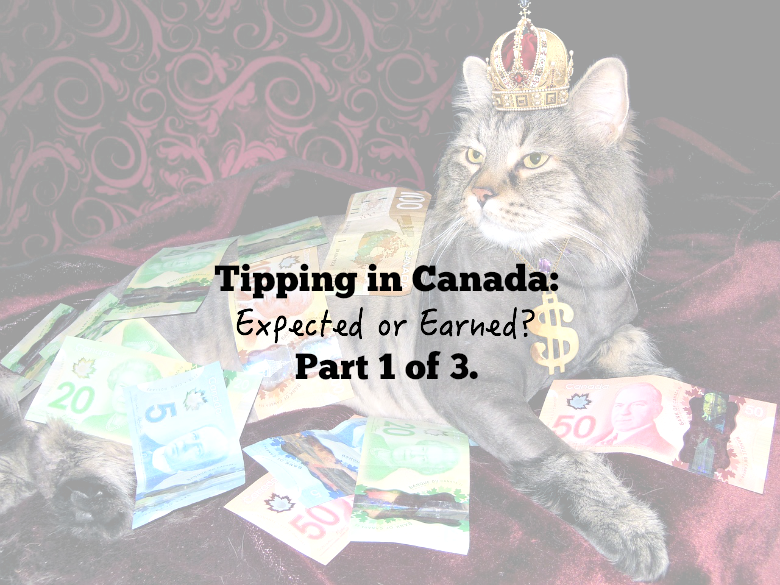 Today I would like to talk about the art of service tipping in Canada. There has always been much controversy on how much one should tip, who actually gets the tip and generally why we tip.

I have been in the service industry since I was extremely young and the same controversy was there 25 years ago as it is today. That being said, have you ever paid debit or credit and the percentage option starts at 15%??? I know right? So, what if you get overall bad service ? Is tipping mandatory? Absolutely not!

I live in the biggest city in Canada (Toronto) and have been serving in this city for over twenty years. When I embarked on this career path it was all about cash. Tips tips and more tips! I soon realized while working next to the international airport, that a lot of foreigners don’t tip! Servers have always had this expectation of at least fifteen percent no matter what the service they give. Well let me tell you! As a professional server, there is no such thing. It is always a gamble. My grandfather once told me that if you serve people like they are sitting in their basement and the restaurant is an extension of their home, the general overall experience is elevated. For why is it that we go out to eat??? There are only three valid reasons!! Yes, only three. Great food, great service and entertainment. That’s it! I have no control over the food itself, but I have complete control over the experience and service you get. I work with quite a few servers who expect that no matter what kind of service they give, that they are entitled to the “norm”. So what do you expect from that attitude??? Here’s my take and response for that. It’s called the give me your money and get the hell out attitude. In Canada we are paid 9.80$ for serving alcohol with food or straight minimum wage where there is no alcohol. Pretty big gamble when raising a family and trying to save isn’t it??? Sure is!

I work in a breakfast restaurant where my average cheque per person is just over 13$. I have a vast amount of regulars that have been coming long before I started and have always been served by women. I make a minimum of 20% on any given day.

So back to topic! Tipping is not a right for a server. I personally tip on service. Great service means great tip! Horrible service means perhaps even no tip and usually a chat with the manager. Sorry guys, if you choose to be in this industry, lose the expectations of tips are a mandatory act. They aren’t! You will know a server who cares for their customers from those that don’t instantly. Just look at their body language and posture. Servers who expect and don’t get a great tip or no tip at all have forgotten that there is no rules about tipping. No one is a cheap person, you decide if you get tipped or not.