You are here: Home / Parenting / Tips For Helping Siblings Get Along 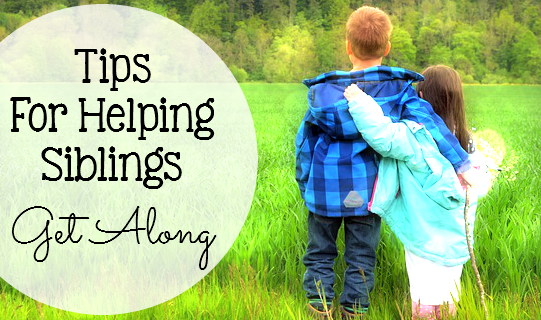 Kyla who is 8 dealt with enough bull to last a lifetime at school so we pulled her out. My husband and I had a few chats and realized just how terrible kids can be to each other, and it can be brought home. Something we don’t need.  My kids are completely different especially during the week after being at school all day long. They usually come home in bad moods, with horrible attitudes and looking for fights. Which doesn’t end well with my kids because they are all like me and don’t put up with much.

Something I don’t deal with is bullies. Teachers, Adults, Friends, Kids, Parents… I’ve encountered all of these in the last little while, and I refuse to have anything to do with it. So, when my kids come home from school and start picking on each other, calling each other names and becoming physical that’s where I draw the line.

I’m not really sure how other parent’s parent their children (or don’t from what I see) but I am a very hands on, semi strict parent. I have basically been on my own since I was 16 years old and I know what it’s like to have a family divided. Siblings not speaking, siblings hating each other, and siblings flat out cutting each other out of their lives. I don’t want that for my kids. So, I try to deal with what I can now in hopes later on in life it helps with their relationships.

Jordan and Kyla are the absolute worst for being at each other. Jordan born in Sept 2003, Kyla in Oct 2006 they are 3 years apart and know exactly how to dig at each other to get one another going. The other kids see it and think they can do the same to each other. They don’t respect each other, so it can be a huge battle  – but one I’m up for, however – I am not up for being a referee when they want to battle it out with each other just because one of them looked at another one.

So, here is what has been working for me! To help my kids get along….

Siblings will fight. It’s life. But, Like I mentioned in my Family Rules post, we have rules that must be followed. To live in a house with so many people, and kids fairly close in age can become very dramatic, chaotic and loud rather quickly.

Siblings will fight, have disagreements and generally not always get along. But, when you’ve dealt with issues such as we have and there are kids hurting with their self esteem, and emotions that we are constantly trying to build back up it’s necessary to keep these sibling squabbles to a minimum. Not only does it make life easier and help those we are building back up get there quicker, it also just makes for a much better household for everyone.

I believe kids learn this behavior somewhere, and usually it’s in the home. It can also be at school. I’ve really noticed that other parent’s aren’t too involved in being parents anymore and that is really sad. I’ve seen and heard things myself to prove this, and have had my kids involved in situations that prove this. My kids are no angels, but my kids have consequences for their actions, get rewarded for their good behavior and generally have a pretty easy, and good life. One which I’m extremely involved in and make sure they have everything they need while not being spoiled, or misguided.

If you haven’t had to deal with this then you are lucky! Enjoy it. I didn’t think I would deal with the severe sibling fights so early, but it is what it is and we are all working on it and dealing with the issues as they come up.

If you are dealing with the same things we are I hope some of our tips can help you out too, and maybe you can share some with us!