You are here: Home / drama / Where has the decency gone? 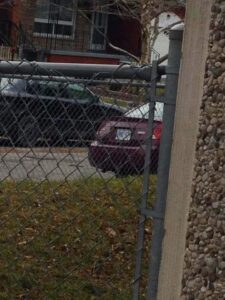 Yesterday I went and picked up my son’s glasses, they finally came in. He had his previous pair broken a week ago at school so we needed to get him new ones. After I had picked up the glasses I had to run over and grab my kids from school. I had to go a slightly different way and As I was walking down the sidewalk pushing my sit n stand as it is too cold to not bundle right up and if I get bundled, and have baby on me I get way too hot and it brings on a migraine – whole other subject – so I had the sit n stand, we got right in front of the school when a car was parked right in the middle of the sidewalk. Not even enough room for me to push by.
So I stood there and said “I can’t get through” he sat there just staring at me. I said “Can you move so I can get through?” He shook his head no at me. At this point I was irritated, it was cold.. I had a 12 week old baby, and a 2 year old on the stroller.. I asked again “Can you please move so I can get by?” he again shook his head NO.
Baffled, and now angry I had to go on the road in to oncoming traffic – which luckily, stopped so I could get by – I did have some choice words for this man as I walked past him sitting in his warm car looking all smug. How rude can you be? I don’t understand how hard it would be to move? It was in a bus loading zone for one which, you cannot park in… and for two? He took up the WHOLE sidewalk. Are sidewalks for cars now? I must have missed that memo.
I went right into the school office, and asked the secretary who I speak to about this and she said “The police” I said, “is it really a matter for the police?” I was a little shocked that she suggested I call the police because I didn’t really see it as a matter for them but she said, “The police traffic division.. I call all the time, and urge others too as I’m just once voice and it’s illegal what he did, and dangerous for you. Its a bus loading zone too. Big no no… Go get his license plate number and call!”
So back outside I went, however when I was coming out I saw him storming over to his car speed walking, dragging his child behind him. I got as close as I could before he drove off and got the photo above. I have no shame in sharing it, I’m just upset you can’t make out the plate at all.
I wasn’t able to call the police as he took off so fast, and again the photo didn’t turn out so I can’t even report it to anyone. I will however, be finding him on Monday and letting him know just how I feel about how he acted, in front of a school with children 10 and under… and what a wonderful example he is to those who actually did see (no children, school was still on but a bunch of parents looked on).
Why am I posting this? As a reminder to those who do drive – it’s not that hard to be nice. It wouldn’t have been hard for him to have turned his car on and even moved up, or moved himself over a bit. Ignorance has reached an all time high when a man can’t even simply move for a mother with 2 small children. It’s disgusting.
It’s a bit ironic too because that morning my husband was speaking to a parent outside the school who is disabled, and she was telling him she couldn’t walk on the sidewalk either and when she went to the principal with her concerns she told her to call someone who could deal with it, she couldn’t. When the mom called the police to report and see what could be done? No one even bothered to call her back.
It may not seem like much to some, so small or petty… But last time I checked cars are for roads, and sidewalks aren’t meant to be a parking lot. Parents and Children shouldn’t be put into danger having to walk on a road into oncoming traffic so you can park right in front of the school because it’s cold and you don’t want to walk far to pick up your kid! The school has 2 parking lots, both of which usually have lots of free spaces, and on this day in question? Did. Multiple.. The other side of the road, which is a 1 way street is where cars are asked to park if spots are full, so buses can pick up kids and parents can pick up their kids safely and freely using the sidewalk. Guess he didn’t get the memo, and can’t read signs.
Previous Post: « HOLIDAY GIVEAWAY!!!!
Next Post: Guest Blog: Christmas Shopping! »