You are here: Home / celebs / Why Justin Bieber isn’t a Role Model… 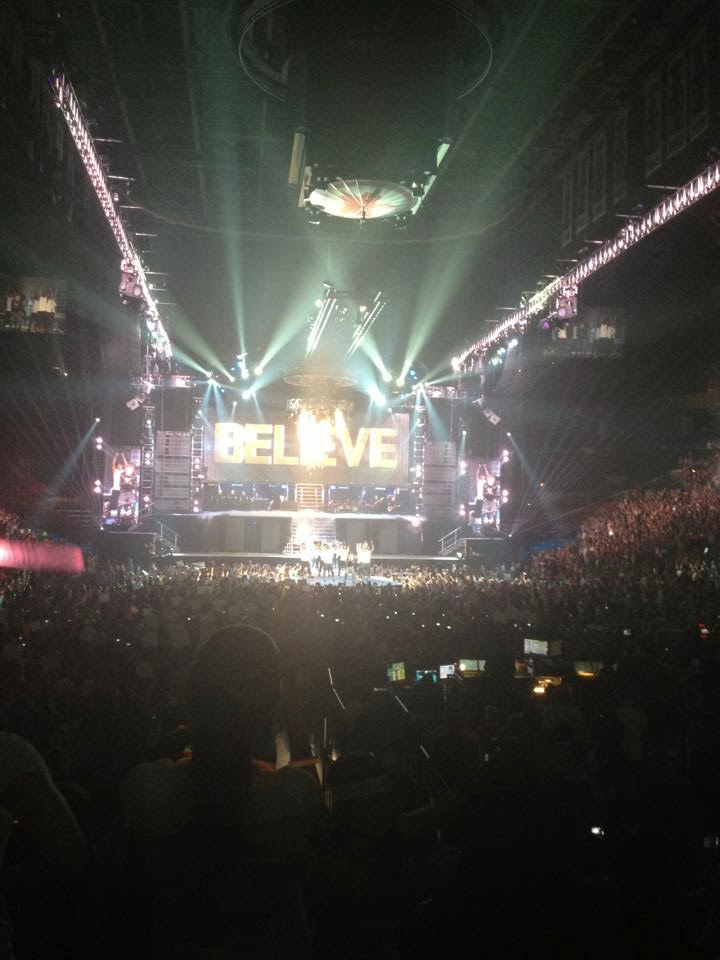 Back in December 2012 I won two tickets to go see Justin Bieber during his Believe Tour. I won them on the radio, and I was so excited because my daughter Kyla who was then 6 loved Justin and I won’t lie I do too! I was stoked. The concert wasn’t until July 2013 a few days before my Birthday but we both couldn’t wait.
The concert was amazing. We both danced our behinds off, and sang along to every single song. It was a great, great show!
Now its January 2014 and I’m sure everyone has seen the stories, articles and clips of things Mr. Bieber has been up to lately. It would be a lie to say that I wasn’t disappointed. I am, I truly am but he’s human and 19.
An excuse? Not at all, but what can I do? Nothing. I can tell you what else I won’t do. I won’t write negative comments about him all over the facebook stories, twitter feeds or instagram photos I see of him. I won’t call him names, or boycott his music.
Why you ask? Simple: I’m not a bully.
My children have dealt with bullies the last two years on and off at their school and to me reading the articles online and comments with hateful words, calling someone names celebrity or not is uncalled for and bullying. Would you want someone to do that to your son or daughter? No, of course not. Why do it to celebrities then? They are human, I don’t care if they “put themselves in the spotlight, they chose that life” it doesn’t matter. Every single day we put our lives on the internet, eventually our sons and daughters will be on the internet too – will it be okay for people to do to them? No, most definitely not.
I understand some of the things he has done are illegal, and I’m not trying to downplay that or say it doesn’t matter – it does, but that’s between him and the law. Not anyone else.
Over the course of the last few days I’ve seen so many comments that seriously as a mother, break my heart to see. Not just because it’s Justin Bieber, but if I saw them written about anyone – it’s crushing. Yes, I am still a fan, yes so is my daughter. Of course I will let her listen to his music still… Why wouldn’t I?  Well, the question I keep getting about this very topic, also comes with these words that I need to address:
“He’s a terrible role model to kids!”
Let me say this simply; he isn’t a role model. My friend Sioux said it best before all of this started and how she said it really stuck with me.. so, I will quote her exact words:
“it’s not his job to be a role model for my kids. That’s MY job”
And to that I say AMEN. It is NOT Justin Bieber’s job to be a role model for ANY KID.. That is us, as the parent’s job.
No it isn’t Britney Spears, Lindsay Lohan, Reese Witherspoon, Miley Cryus or even Lady Gaga’s job to be a role model. PERIOD. Sure, kids may “Look up” to these talent’s but it’s our jobs as parents to do our very best as parents, set good examples and teach them right from wrong. Not these celebrities. I absolutely loved Backstreet Boys when I was younger (who am I kidding? I STILL do!) but I never thought of them as role models. I loved that Marilyn Manson song “Beautiful People” when I was 13, but I didn’t think of him as a role model either… My role models always were, and always will be my mom and sister. I was obsessed with the Backstreet Boys too it was kind of sad now that I look back at it, but what can ya do. I lived, and I’m no worse for it. My mom and sister were my true heros, and no celebrity could ever lead me down a path that I wasn’t already leading down anyways. It would have been my mom’s job to make sure she taught me well enough to know right from wrong and steer me in the right direction.
Everyone has opinions, and everyone is entitled to them, even the negative. But, My point here is what Justin does, Justin will have to answer for in his life. If he does illegal things, he will deal with that one way or another. If he wants to continue on down the path he is going – he will. Writing nasty things about him online, or saying nasty things about him on tv won’t change that. Yes, he needs help. I hope he gets the help he desperately deserves. But he doesn’t need to be victim to the endless bullying and disgusting things he’s being subjected to in the media and online. It isn’t right — for anyone, as a human being. But the stories, the comments, the remarks? that just isn’t right. If your only excuse is that he’s horrible for kids, and is no role model – he isn’t. Plain and Simple.
And yes, I know not every child has a wonderful home life, I get that. So maybe they aren’t headed down the right path to begin with and JB’s actions speak volumes to them – and they think it’s okay and want to be “just like him” I get that too. Sadly, only we can be in control of us, and our children. But, Maybe instead of such hateful, nasty remarks – words of encouragement and strength would be better suited… I don’t know, I guess the overprotective mother in me think’s maybe, just maybe that may be a little bit more constructive.
Previous Post: « Are My Kids Missing Out?
Next Post: Review & Flash Giveaway: Kael&Kaed Genuine Baltic Amber »